Departure from the port of Milazzo at 10:00 am for Stromboli.
He will stop on the island for about two and a half hours to allow the independent visit.
At about 2:00 pm we will leave to reach Panarea. On the route to the island of Panarea it will be possible to admire from the sea the bay of Calajunco, the beach of Zimmari and the promontory of Capo Milazzese.
Landing in the port and useful stop for visiting the town of San Pietro.
Re-boarding and en route to Stromboli. While sailing it will be possible to admire the micro archipelago formed by the islets of Lisca Bianca, Lisca Nera, Basiluzzo, Spinazzola.
You will then arrive near Strombolicchio and stop under the Sciara del Fuoco to admire the eruption of the ever-active volcano from the sea.
The return to Milazzo is scheduled at about 22.00.
View More

Boarding at 09:45, departure at 10:00 from the port of Milazzo to reach the island of Stromboli.
While sailing, it will be possible to admire the promontory of Milazzo, on which stands the great Castle, the largest fortified citadel in Sicily and the Ancient Village. Inside the walls, there are the Ancient Cathedral and the Palazzo dei Giurati.
Arriving at the port of Stromboli, a stop of about two and a half hours will be made for an independent visit of the island. Considered by many to be the most beautiful and fascinating island of the Aeolian archipelago, Stromboli is known all over the world thanks to its constantly active volcano, which offers spectacular explosive eruptions. In Stromboli there are many black sand beaches, among which we mention the beach of the Forgia Vecchia, the beach of Ficogrande, the beach of Punta Lena and the beach of Piscità.
During the stay on the island, we recommend a visit to the church of San Bartolomeo built in 1801 in whose facade there is the statue of the patron saint of the Aeolian and of the Church of San Vincenzo, from whose square you can admire the panoramic view of the port and of the beach of Scari with Strombolicchio, the oldest volcano of the Aeolian.
It is also possible to climb to the crater of the Stromboli volcano up to the Observatory located 400 meters away, from where you can have another magnificent panoramic view of the island.
In the afternoon, Stromboli will leave to leave for Panarea. Arriving at the port will stop about 2 hours. Panarea is the smallest island of the Aeolian Islands and in the summer it becomes the most exclusive island of the archipelago, the destination of many VIP holidays. For swimming, we recommend the beach of Cala Zimmari, the only sandy beach on the island and Cala Junco, a bay among the rocks with a particular amphitheater shape that forms a natural swimming pool with crystal clear waters.
It is possible to independently visit the prehistoric village of Capo Milazzese, dating back to 1400 BC, reachable on foot in about 45 minutes, or with the typical electric taxis of Panarea and the Church of San Pietro, the main religious building on the island.
Re-boarding and en route to Stromboli. We will then arrive near Strombolicchio and stop under the Sciara del Fuoco to be able to watch the suggestive eruptions from the sea that this volcano in constant activity gives us.
The return to Milazzo is scheduled at about 22.00. 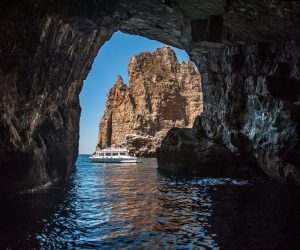 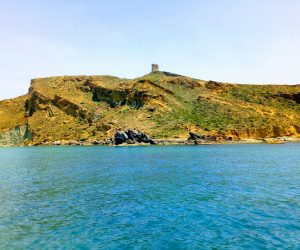 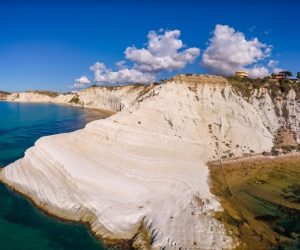 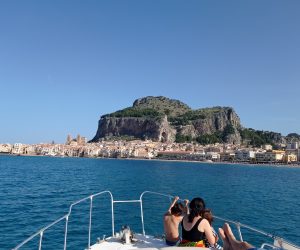